SOPHIE BALDWIN talks to couple who swapped the wintry wonderland of Switzerland for a bush block at, of all places, Boort. And they are pretty happy they did.

THE northern Victorian bush town of Boort is, by any stretch of the imagination, a far cry from cosmopolitan centres such as Berne, the 800-year-old de facto capital of the Swiss.

But Marlies and Peter Eicher traded Alps, chocolate and watches for a new life in the Australian bush – building an amazing olive enterprise.

They embraced the challenge of establishing their olive grove, Saluté Oliva and on what was a bare paddock have created an award-winning, organic operation.

As former engineers (Marlies in textiles and Peter in electrical), the couple first moved to Australia in 1988 after a job proposition lured them to Melbourne.

Their hobby of hang gliding and chasing a good hot thermal saw them visit many northern Victorian country towns, including Boort.

The opportunity to purchase a property on the outskirts of town some years later proved too much of a temptation for the couple who had decided to make Australia their home and in 1998 they became the proud owners of a 15ha property with a 54 megalitre water right.

“We didn’t even know what the water right meant when we bought the place initially, we have since found out it is very good,” Peter laughed.

Fortuitously the water right has been a godsend, especially over the years of drought.

“We knew we would still like to travel back to Switzerland so we decided from the start anything with animals would be to complicated for us. Marlies came from a horticultural background and we somehow stumbled into olives,” he said.

With the decision made, the couple embarked on their journey and an endless stack of spreadsheets, to turn their vision into a reality.

“As engineers, we had spreadsheets coming out of ears – we made spreadsheet after spreadsheet,” Marlies laughs.

From the onset the couple decided if they were going to make a go of a small business they had to be in control of every aspect, from paddock to plate.

Peter cannot overemphasise how important a strong and sound business plan has been to their success.

“Just being a grower is not enough. If you want to do that on your own you tend to have to grow five times the amount and then you run into employment and other issues and it becomes an endless cycle,” he said.

“The only way to make a business of this size work is to be in control of the three businesses in one – to be the grower, the processor and in charge of the sales and marketing.

“Every one of these businesses takes money away from the bottom line but when you are in charge of the whole process, it only goes through your hands and you keep all three margins.”

Peter and Marlies are responsible for everything in their business from growing and harvesting to marketing and sales and while it is hard work at times, it has been a very rewarding adventure.

They have consistently won awards for their products over the years, a fact Marlies is very proud of.

“We continue to medal and that shows us and our consumers that we produce a consistent, quality product year in year out,” Marlies said.

When the couple established the orchard they knew they wanted to grow varieties that would allow them to make quality oil and table olives – they decided upon frantoio, kalamata and manzanillo.

Frantoio is an Italian variety grown mainly for oil, kalamata is exclusively for table olives while manzanillo is a Spanish variety which can be picked early and cured as a green Sicilian olive.

At the time the couple chose to plant them on raised windrows, a decision they cursed from a management perspective for many years  (it’s harder to mow and generally work around a raised bed) until the flood of 2010 came through.

The raised windrows actually saved the orchard from drowning as it had lain underwater for several weeks.

Both Peter and Marlies have learnt so much from their very early days and Peter said part of that knowledge has come from sharing information.

“We started our grove just as the olive industry was starting to take off in the area so we have been fortunate to be able to share information and resources with Boundary Bend Olives (formerly Timbercorp) who are just down the road. We are a completely different operation to them, but our relationship has been an important part of our learning in the industry. We might be like David and Goliath when it comes to the scale we grow on but nevertheless we have been able to help each other.”

As part of their business plan, the couple installed a plant capable of processing a tonne of olives an hour.

This gives them a short turnaround time and also enables them to produce a high quality product with a maximum shelf life.

While harvesting and pruning are busy times of the year, the couple do enjoy down time and the flexibility that comes with running their own business.

Marlies said they have both been surprised by how loyal their customer base is and they have had many customers who are still returning years later.

“We have people who have been buying our olive oil for years. We had one lady in Melbourne who was bought to tears by the taste of our oil because it reminded her of her nonna’s,” she said.

The couple regularly sell their product through farmers markets and it can also be found in various retail outlets including David Jones.

They said the public is extremely interested in the paddock to plate philosophy, along with organics.

“Initially we didn’t think going organic would impact on our business as much as it has but it certainly is the way of the future. Organic food is everywhere in the supermarkets in Switzerland and it will only grow more here in Australia,” Peter said.

While the couple know there are opportunities to grow their business in the future, they are more then content with the way things are.

“We could expand our business but we don’t want to do that. We have enough work without going crazy. Maybe we would have liked to build an empire if we were both in our 30s but we are nowhere near that age now and we are quite happy cruising along,” Marlies said. 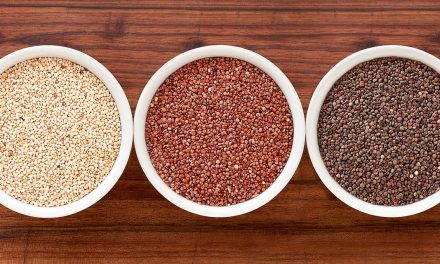 Capitalising on the quinoa superfood trend