Meet one of the two smaller farms sharing a small farm — with two other smaller farmers — to create a 21st century style of farming at Harcourt, in central Victoria. This farming ‘revolution’ has been the brainchild of the land’s owners — their way to encourage, and financially back, young people to get back on the land without the burden of debt.
Down Bendigo way, in central Victoria, is a little cluster of very small farmers who are, in a sense, sharefarming a small farm.
The award-winning Harcourt Organic Farming Co-operative might be seen as small potatoes in the bigger agricultural picture — but its producer members do face many of the same challenges as the country’s biggest farmers.
Being crowned Agribusiness of the Year and overall Business of the Year in the local 2021 Mount Alexander Shire business awards was justified reward for the enthusiasm, innovation and determination of the co-op’s members — The Orchard Keepers, Gung Hoe Growers, Sellar Farmhouse Creamery and Carr’s Organic Fruit Tree Nursery
Co-op member Mel Willard — who runs garlic producer Gung Hoe Growers — said work was made lighter through the internal community the members had created.
Mel said the close proximity of the other four enterprises — as well as the sharing of resources and agricultural tips and practices — meant the growers rarely spend the day alone, which can be one of the drawbacks of farming, big or small. One of the many benefits of the co-op set-up is the ongoing support the members provide each other.

“One of the reasons the co-op is good is because you’re supported,” she said.
“Quite often farming is really isolating. But here at the co-op generally someone’s having a bad time and someone’s having a great time — that always moves around us.
“We’re all small enterprises. We just want to be sustainable financially, emotionally and physically — we don’t just want to get bigger and bigger.
“Climate change really is changing everything. We were not expecting a La Niña this year — we thought it’d be really hot again.
“I’ve seen it get drier. I’ve seen it get windier. I’ve seen weather events become more extreme.” Sprawling across 30ha along the valley’s foothills at Leanganook, the four co-op businesses are a dairy, an orchard, a nursery and a market garden. Photo: Matthew Sutherland

You can also feel the frustration and discomfort from all the farmers in the Harcourt Organic Farming Co-operative.
From the orchard to the dairy, they are trying to figure out their place in the changing future of the agricultural industry — and whether their mission might be the change it so desperately needs.
“As we stare further down the barrel of climate change, agriculture is one of the biggest emitters in Australia,” Mel said.
“We’re trying to create a sustainable, localised food system that’s accessible to people who earn as much as us — which isn’t much.”
However, the group’s recent awards also reflect the most glaring reason behind the success, and you can put it simply — there might be a quiet humility to this group of Harcourt farmers, but that is underpinned by the knowledge they know exactly what they’re doing.
Speak to Mel and you quickly realise she marches to the beat of a different drum.
Most people measure time by the calendar; at Gung Hoe Growers it is based around harvests. As Mel put it: “We just pulled up our seventh garlic”.
Sprawling across 30ha along the valley’s foothills at Leanganook, the four co-op businesses are a dairy, an orchard, a nursery and a market garden.
The co-op was founded in 2018 by Katie and Hugh Finlay, who own the land but couldn’t interest the next generation to run the family farm.
Finally its demands got beyond them and the orchardists knew it was time to sell or farm smarter.
So they developed a plan to lease out their land to a collaboration of young, diverse, organic farmers.
And the Harcourt Organic Farming Co-op was born.
All its members operate through a Community Supported Agriculture (CSA) model, in which consumers share the precarious nature of farming with the growers.
Subscribers pay upfront at the start of the season — so the growers have the capital to buy seeds, compost, irrigation and tools to then grow the produce.
But, each harvest, the risks for both parties are growing.
Mel said the pressure on farmers to be the ‘change-makers’ on climate change was immense. But without policy support from governments and financial support from individual consumers, the task was impossible.
From the outset, the co-op has been committed to treading lightly.

“We encourage biodiversity above as well as underneath the soil. Which is why our gardens will never look superbly neat,” Mel Willard says.

At the top of the hill, the shipping container ‘farm houses’ are covered in solar panels.
Tessa Sellar from Sellar Farmhouse Creamery’s mobile milking parlour (the first of its kind in Australia) sits in the driveway, ready to individually greet all 10 of her herd.
Mel said the dairy was almost completely off the grid.
But the dairy isn’t the only small farm playing its part — the commitment to regenerative agriculture plays a crucial role in each enterprise’s mission.
At first glance, Mel’s market garden has an aura of organised chaos — weeds and grasses seem to reign over the budding cauliflowers.
“Gung Hoe Growers is small-scale,” Mel said.
“We encourage biodiversity above as well as underneath the soil. Which is why our gardens will never look superbly neat.
“We deliberately let things go to seed to spread things around — we’d much rather have borage as a weed than couch.”
Farming in this climate is no easy feat, and it seems the Harcourt growers have built something admirable. A seed of hope in the industry’s future.
“We were so lucky with our community, they believed in us more than we believed in ourselves,” Mel said.
The other co-op members agree they are all part of a remarkable farming experiment.
Sellar Farmhouse Dairy is where Tessa Sellar runs a micro-dairy with the help of her partner Oli, milking a small herd and using sustainable farming principles.
Processed on-site is fresh milk, yoghurt and no-salt butter — with the products sold locally through CSA subscriptions and farmers’ markets.
Carr’s Organic Fruit Tree Nursery is where Merv Carr has been grafting and budding heritage fruit trees for more than 50 years, with Katie Finlay and Liz Carr continuing the tradition.
Carr’s Organic Fruit Tree Nursery grows a huge variety of quality heritage fruit trees for sale in winter as bare-rooted trees. The co-op was founded in 2018 by Katie and Hugh Finlay, who own the land but couldn’t interest the next generation to run the family farm. Photo: Matthew Sutherland 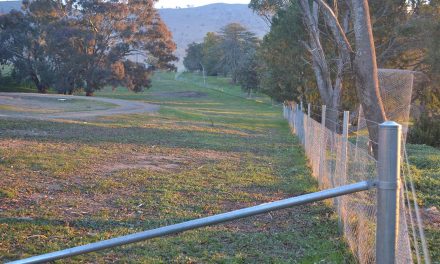