Stone the crows and the rabbits 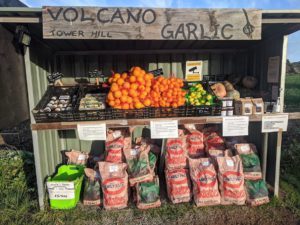 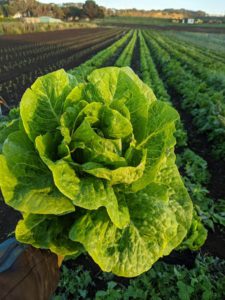 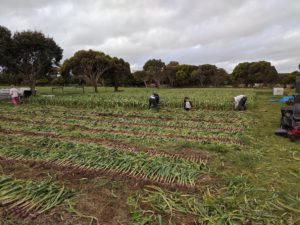 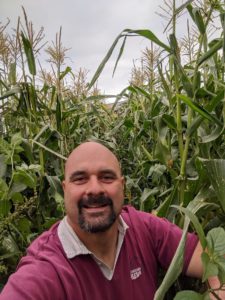 Can you explain ‘strike me pink’? How about ‘strewth’? Then there’s ‘bonzer’ and ‘carn’ and ‘cobber’. We’re only asking you because we have no idea, says ANDREW MOLE.

But if you want to understand ‘stone the crows’ — or, more accurately, ‘stone the bloody crows’ — allow us to introduce scientist turned small farmer Ben Pohlner.

Four years ago, seeking a dirt change, Ben established Volcano Produce, getting him out of a mostly desk-bound role with Wannon Water in south-west Victoria to something more enriching and, as he quickly discovered, incredibly frustrating.

Did someone mention crows? If he hadn’t seen it, Ben would never have believed it. Whole paddocks of corn, pumpkin, cucumbers, zucchini, peas, beans, etc, etc, disappearing under a dark cloud of destruction as, literally, thousands of crows would arrive as soon as plants were 5-10cm above ground, pull the plants up and eat the kernel on the bottom.

For two years the crows destroyed every one of those crops and the business got nothing for all the work that had gone into it.

“It was unbelievable, there were so many of them and they blanketed paddocks and didn’t leave until everything was gone,” Ben said.

And crows are cunning creatures. If you think gas guns or scarecrows are going to frighten them off, the only one you are kidding is yourself.

But a bit of intensive research later and Ben set up a sound system around each of their five blocks — playing crow muzak.

“The speakers we have installed play raptor calls and the sounds of injured crows, and they have worked brilliantly,” Ben explained.

“The crows still come, but they can’t work it out so they fill all the trees around our properties, but they don’t come back, they just sit and watch.

“Even though our resident crows, five or six of them, have worked it out, the big flocks seem totally fooled by it and hopefully things will stay that way.”

But if crows proved to be an airborne catastrophe, the subterranean assault by regiments of rabbits would prove to be just as devastating.

When Ben added another small block to his growing aggregation, he and his team spent three months exterminating them from the new paddocks-to-be, and when they found no trace of any activity they took the plunge and planted 10,000 seedlings.

“First night, I just couldn’t believe it, even with us there with spotlights there must have been close to 100 rabbits chewing their way across the paddock, the damage was incredible,” he said.

“It gave us no choice but to install rabbit-proof fences on all five of our blocks, and obviously that doesn’t come cheap, but they have been effective.

“You don’t have to dig them in, they have a half-metre apron and you simply cover it with dirt and the rabbits just cannot understand it, so it was a good investment in the end.”

But getting back to Wannon Water and career 2.0, Ben said he and his workforce — wife Sarah, daughters Georgia, Abby and Hannah and mother-in-law Barbara Borgas — erupted onto the farming scene with a single, 2ha block.

It started with them taking baby steps. They ran the business with Ben part-time on the land while still playing the scientist most days. Until February last year when he took the plunge, quit the office job and turned to the land as the family’s future.

Where they are blessed with what he describes as “the most magnificent soils in the world” with their farms not just in the shadows of Tower Hill, Victoria’s most famous (thankfully dormant) volcano, but literally on its flanks where, all those years ago, it spewed out what is now the incredibly rich basalt plains of the Western District.

While he knows probably everyone in his place has said it before, Ben can’t help saying it again: “The first year or two were a very steep learning curve”.

“I had this great dream of something organic, or spray-free [no pesticides or herbicides] but the reality quickly set in — this farming thing wasn’t as easy as it looked, or as I expected it to be.

“There is a lot of stuff on YouTube and Facebook but in the end you still have to face it on your own and work your way through it, and I admit there were times early on when we felt overwhelmed and there was a fair bit of soul searching.

“At the time some of the problems seemed insurmountable, but I really wanted to keep going — and we did.”

Emotion and expectations aside, Ben was adamant the farm had to pay its own way even as he came to terms with the realisation that his original two hectares simply weren’t going to cut the mustard.

So an extra eight (and a bit) leased hectares, on five other blocks, have been added to the mix — along with an extra 10 staff to juggle the load — and unleashed a cornucopia of varieties into local diets.

Early on it was pretty tough going, but Ben said once they started acquiring some machinery things really started turning the corner.

“We plant between 10,000 and 20,000 seedlings every two weeks and we would not last the first two weeks without our machinery.

“But with our seedling planter we can knock 20,000 over in a day, and we have added four tractors, each with a different role and all with an amazing set of implements.”

Ben would like to think he can rattle all his produce off the top of his head, but his brain starts to falter at around 20, even though he gave it his best crack: potatoes, cabbages, cucumbers, zucchini, broccoli, broccolini, kale, leeks, radishes, spring onions, corn, stone fruits, carrots, beets (and a lot more) and the foundation and ongoing cornerstone of the enterprise — strawberries and garlic.

Last year Volcano Produce did six tonnes of strawberry firsts (plus another tonne of seconds). This season Ben is expecting 20 tonnes.

The blocks are irrigated by an incredibly high quality bore (also courtesy of Tower Hill, Ben said) although that in itself was a learning curve stretched across six months where he found himself on the opposite side of the counter as a water customer instead of a water controller — another hard lesson learnt.

And many of the crops are also under plastic, while the taller ones are covered by overhead sprinklers (and that crow music).

These days the biggest challenge at Volcano Produce is about the best one you can have — they simply can’t keep up with demand.

The end result of Ben’s determination was his fruit and vegies wouldn’t just be spray-free, they would be the best tasting he could make them.

So he plunged into trial after trial, bored down into the micronutrients of the soil, kept testing it over and over.

It wasn’t about being the biggest, or being the most attractive looking fruit — Ben wanted Volcano Produce to live or die on the pure taste quality of everything he grows.

Funnily enough, although there any many fruit and vegie growers in his little slice of paradise, the boffin from the water company had uncannily spotted a glaring niche in the local market and he wasn’t going to let it go.

“That kind of end product doesn’t happen by accident, we have put in a lot of work and once people taste what we are growing they are hooked,” he said.

If Ben had overcome the nuts and bolts of being a market gardener, when he took on the marketing things truly did go nuts.

Farmers’ markets at Warrnambool and Port Fairy, a roadside stall, then local IGAs, shops and restaurants and even his own take on click and collect — send in your order online, it gets made up and is left at the roadside stall for you to collect.

“It was a little hard to convince people we had something different — taste,” Ben said.

“But as soon as you could convince them to have that first bite you’re almost there. We have such a good following now, with fantastic customers from far and wide.”

The first time Ben was at a loss for words was when he tried to explain if the experiment of doing something that really contributes, to producing and supplying food and taking all the farming risks of which he is now fully aware, has really been worth the trouble.

A seriously pregnant pause while the scientific side of his brain analysed then processed the question.

“I can’t wait to get out of the bed — every morning,” he finally said.

“When you harvest a paddock, when you see and taste that product, when it all works, like the other morning when we sent off 700kg of broccoli to a local supermarket, knowing it is the best it can be, then there is this enormous sense of satisfaction, of achievement and it’s hard to top that.”