The Dexter is a small breed with a beefy reputation that is carving itself a new niche as a milker and its already enthusiastic owners are now singing new praises for what they are describing as beefy little milkers.
Before we get started, there’s a small matter we need to get out of the way — the proverbial elephant in the room — when we are talking about small cattle. The word ‘small’ being pivotal.
The Dexter might be a smaller member of the bovine brigade — but it’s not a miniature. Not by any measure.
In 1800s Ireland, where peasant farmers owned land measured by handkerchiefs, smallholdings provided marginal grazing in very tough climes — for which dextercattle.org.au tells us the naturally hardy Dexter proved to be the perfect provider of meat and milk.
Dexter cattle herd books are now some of the oldest cattle pedigree records in the world.
Today these little guys — well, the little girls, actually — are enjoying a resurgence as a dairy option on small farms around the country.
And one of the breeders lapping it up is Ron Brown from LRB Dexters. Not long after acquiring his first Dexter cows he also became involved in the Dexter Cattle Breed Association, firstly as a member and then secretary of Manning Valley Dexter Cattle Promotion Group. Ron has also gone on to be a councillor on the National Council of Dexter Cattle Australia Inc.

With a big smile, Ron points out he wouldn’t have had anything to do with Dexters were it not for his wife Libby finding a breed promotional stand at a Tocal Field Day.
So if he is running around too much after ‘their’ Dexters, it’s not his fault, he’s just doing everything he can to keep the joint owner — and Dexter discoverer — happy.
What has also made Ron stand out in the current market is his determination to keep the members of the Manning Valley Dexter Cattle Promotion Group as cohesive as possible by substituting their regular get-togethers with the buzzword of the pandemic — Zoom.
“Our group has six members at the moment — four full and two associate — and we have had to replace what used to be regular on-farm meetings with seeing all our faces on a computer screen — and the members have all been really good about it and prepared to give it a go,” Ron said.
The Zoom meetings have also provided an opportunity for the group to invite people who have shown an interested in Dexter cattle at events such as the Tocal Field Days or via the group’s Facebook page.
“This engagement with these ‘would be’ Dexter breeders has widened the range of topics covered at our Zoom meetings. It has also directly helped the wannabes with critical information about the breed and provided leads for them to access animals for a starter herd,” Ron said. “It also gives us a much wider reach. For example, at our last meeting we were joined by a breeder from Inverell who had accepted our Zoom invitation. Now we are finally planning our first live on-farm meeting for a long time and hopefully we can all meet face to face. Even the people from Inverell are interested in attending.
“At my full-time work, Zoom is an excellent management tool and it has proved just as useful for our cattle breeders with everyone overcoming their limited technology skills in no time at all.”
Ron said the group’s ‘normal’ meetings involved on-farm visits to inspect someone else’s animals, hear and see their management strategies, and the opportunity to ask questions of people who knew where you had come from and where you might be going.
“Our last meeting before we were shut down again saw a group of us take a trip to an AI school at Burrell Creek, and it was a great day and we learnt a lot as we were taken right through the process and everyone thoroughly enjoyed it,” Ron said. Ron and Libby purchased their Glendon Brook farm in 2007 — it is 8ha — and after a few years of slashing grass realised they’d had enough of that and what they really needed were lawnmowers. On four legs. But what would be on top of those legs was the unknown.
“Slashing, we quickly discovered, was not the most productive way of spending our time, and that’s how we ended up at Tocal in 2011, where Libby spotted the Dexters,” Ron said.
“We bought three Dexters, and they were doing a great job, but we also fell for them in a big way; and after joining the Manning Valley Dexter Cattle Promotion Group — which we did basically as soon as our first cattle arrived — we started getting more of them,” he said.
Ron and Libby also enthusiastically took on the opportunity to show off their new four-legged friends by taking them on the local show circuit.
In what seemed like no time at all they had been to shows at Newcastle, Maitland, Gresford, Singleton, Sydney Royal, Dungog, Nabiac and Mudgee.
“Showing cattle is a great way to meet other people in the cattle industry, and more importantly make sure people see what Dexters have to offer compared with the other breeds,” Ron said.
Libby and Ron have shared the ups and downs experienced by all farmers.

“Everything is fine while the seasons are good, but once they go bad that presents another whole set of problems.”
Timing being not the least of them.
After battling on as best they could through the dry in 2019 and with 2020 not appearing to offer anything different, the Browns had run out of options — so the tough decision was made to start downsizing and in late January cattle started leaving the property.
Two weeks later it started to rain.

Today LRB has three cows, one bull calf and three steers, and Ron is back on that learning curve — as a milker.
And he says he has one very important tip for anyone trying it the first time — don’t use a leg rope.
“As a breed, Dexters are holding their own in the world of small farms and small cattle, in regard to their ability to provide quality beef but they also have the advantage of being so good for milking,” Ron said.
“We actually started hand milking, with a bucket, but if that gets knocked over then you’ve got a problem,” he said. “That’s when the leg rope was suggested and with the cow we tried, well, that ended in disaster.
“In the end we bought a milking machine, which we put together, followed all the instructions, did the tests using our thumbs and fingers to get the hoses and cups in place and then went live — and it all went wrong.
“Finally with the help of some elastic bands we got the hang of it and so did the cows, and now we are milking two of them and we take about two litres from each one every few days, which still leaves plenty for the calves.”
The secret, according to Ron, is a full trough of tasty chaff, warm hands and soft words. He’s confident that you can get the milk to flow without the need for a leg rope. If it doesn’t, he recommends you get another cow.
While Dexters are also starring as individual house cows for couples, there are some limitations if you are not a permanent resident, according to Ron. The most obvious being the need to milk every day — and people still working off-farm, or running two homes, simply cannot manage that.

“Dexters work better as house cows for retirees and downsizers because if you have, for example, a Holstein Friesian, you are going to end up with way more milk than you need, or could ever consume,” Ron said with a laugh.
“Then there are the pitfalls, such as mastitis. We had a really bad one, so bad the vet came out and recommended we put her down as the antibiotics didn’t seem to be working. She had had a stillborn calf and we had tried milking her by hand, but because we only took a fraction of the milk she was carrying her udder became infected. We eventually dried her off and she did recover, and has had two calves since then.
“We are just using the milk to drink and for cooking, but I know others are using their milk for cheese and soap and similar products, and if you have that rural lifestyle in mind, the Dexter is a superior choice for what you want.”
In a seriously bull market for the beef industry, where saleyard prices have shot to or beyond the value of a stud Dexter bull, some are being consigned to slaughter; but the versatility of the cows is proving the breed’s worth — and its saviour.
Apart from the fresh milk you can also get cream, cheese, yoghurt and use all or any of that for the age-old farm practice of barter, or even take up a stall at a local farmers’ market.

FOOTNOTE: To find out more about the Manning group, go to manningvalleydexters.org or Facebook: Manning-Valley-Dexter-Cattle-Group 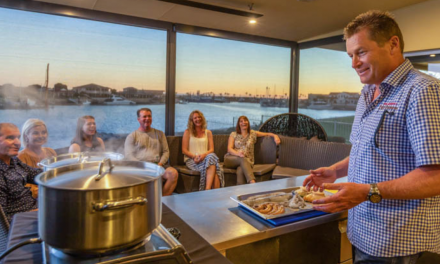