The nation’s farmers are bracing for a tough winter, after autumn rains eluded much of the country, hindering crop planting and pressuring livestock producers moving into the colder months, the latest Rabobank Rural Confidence Survey has found.

However recent widespread rainfall across Western Australia and parts of South Australia and the eastern states has offered hope of some reprieve for agricultural producers for the year ahead.

While the latest quarterly survey of 1000 Australian farmers released recently found an uptick in overall rural confidence in the nation, sentiment remained at low levels – with the rural confidence index edging up to a net reading of -1 per cent, from -11 per cent last survey.

Rabobank Australia chief executive Peter Knoblanche said while some areas of Australia had welcomed good rains in early May, many key agricultural regions had struggled through a severely dry autumn, waiting for the seasonal break to replenish well-below-average soil-moisture levels and depleted water catchments, after such a prolonged period of dry weather.

“This will have been weighing heavily on farmers as the winter cropping season began and as livestock producers moved into winter with poor pasture growth and low dam levels,” he said.

However Mr Knoblanche said recent weather fronts which had moved across the continent in the past weeks had brought late widespread rain to much of Western Australia – offering hope to many in the state’s cropping regions – and also bringing much-needed additional rainfall to parts of South Australia and some areas of the eastern states.

“There are also a number of positives at play for the agricultural sector, including improvements in some commodity prices, such as dairy and wheat, and a softening in the currency,” he said.

The latest survey, completed last month, found the number of respondents expecting conditions in the agricultural economy to improve in the coming 12 months had risen slightly – to 27 per cent, from 22 per cent in March 2019.

The number of farmers with a pessimistic outlook fell back slightly to 28 per cent (from 33 per cent in the previous quarter), while 36 per cent indicated they expected the agricultural economy to remain stable in the year ahead.

Drought was still the primary concern for farmers.  Of those who had a pessimistic outlook on the coming 12 months, drought was cited as a key concern by close to three quarters.

Mr Knoblanche said this was unsurprising with some areas of Western Australia experiencing their driest five months on record (to May) and parts of South Australia having their driest start to the cropping season in more than 100 years.  And with no drought-breaking rainfall across much of New South Wales and southern Queensland.

With Rabobank forecasting a sub-20 million tonne wheat crop, based on current conditions, Mr Knoblanche said there were areas in southern New South Wales and Victoria which had received a decent autumn break and crops were emerging well.

“And other cropping regions in Western and South Australia will hopefully also now get a chance from this late break,” he said. 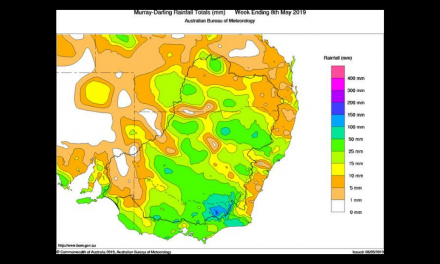