In the heart of Victoria’s historic apple country is a dairy farm that wants to grow up to be small — really, really small.
Among all the ‘ines’ of the animal kingdom, there’s this funny thing about canines and bovines.
When it comes to the dish-lickers, well — everyone knows you can’t teach an old dog new tricks.
And when it comes to older dairy cows, Tessa Sellar has learned the hard way they’re not so quick on the uptake either.
This one-woman show at the helm of Sellar Farmhouse Creamery quickly realised that was only the first step up a very steep learning curve as she set about creating a micro dairy at Harcourt in central Victoria. After interning full-time in the highly successful Holy Goat Cheese enterprise at Sutton Grange, Tessa moved on to her own business. She has been marketing her milk products for two years now, after an initial 18 months ironing out all the kinks in the establishment of her micro dairy.
Right now it is Tessa’s goal to build her milking herd to the dizzy heights of a metric dozen — as far as she is concerned, 10 milkers will be more than enough for the future of her dairying dreams.
“I have eight milkers right now, and some heifers coming through, which has taken me a little longer than I had planned — but even those initial setbacks were a valuable lesson for me,” Tessa explained.
“I won’t ever buy older cows again — I will breed my own and start them in the dairy as young females who will be able to grow with me as I continue refining my management practices to make the micro dairy deliver on all the things I have planned for it.”
And Tessa is not joking — she might be new to the dairy owner/operator club, but she is also proving a more-than-capable pioneer in her own right.
Because among other things, she is pretty confident she is the proud owner of Australia’s first, and only, licensed mobile milking parlour. Tessa says the best part of dairying is hanging with the cows.
Photographer: Oliver Holmgren.

An innovation she describes as being — of all her equipment — the greatest success at the creamery, and a design she hopes will help the small-scale dairy movement become a big player in the wider market by making their owners more financially secure.
She says they will also have “many positive outcomes for cows and land” and she is delighted the concept has also been embraced by Dairy Food Safety Victoria.
“Whenever you have large numbers of animals regularly congregating in the same place, it’s pretty much a given you will end up with environmental problems,” Tessa explained.
“For example, the concentration of manure creates high levels of nitrogen, the plants which then grow are usually considered weeds, such as cape weed, mallow, nettles and others.
“Severe animal impact results in dusty bare ground in summer, burning off any fertility in the soil and making a hard-pack surface for water to run off.
“In winter it’s a muddy pit which leads to dirty animals — and as udders and teats get dirty the risk of mastitis increases, along with increased udder cleaning time.
“It’s also just not very pleasant, working in mud every day, cow and human alike.
“However, once you turn down the concentration dial, both these problems — fertility and impact — become incredibly valuable tools, if not vital, for restoring landscape functions. If only you could have these elements spread out across the paddock rather than concentrated in holding yards, laneways and dairy parlours.”
Enter Sellar Farmhouse Creamery’s mobile milking parlour — built by Tessa’s significant other Oli Holmgren, who has been responsible for conceiving, creating and commissioning the little farm’s infrastructure.
Tessa says the mobile milker is not a new concept. In Europe they are regularly used with smaller herds, particularly in grazing conditions such as the alpage (mountain pasture) where animals spend summers moving up the mountain to take advantage of magnificent pastures.
She says to bring the herd back down the mountain for milking daily would defeat the purpose completely.
“So we had many examples to offer inspiration when designing.
“While on my six-month sabbatical along the east coast, I spoke with many dairy farmers about this concept.
“It was at the dinner table at Elgaar Farm in Tasmania the basic design came together — after which Oli and I spent lots of time looking at the Ukranian mototecha model and, closer to home, Taranaki’s take on this at its Woodend home.
“From all that research Oli and I decided on the tweaks and alterations we would need to meet our needs.
“After all it seemed silly to do the washdown in the paddock, which would require hot and cold water and cleaning chemicals. We already have all these at the factory, so why not have all the equipment based on the back of a ute, which drives back to the factory with the milk.
“Many of the European models don’t have a floor but we decided for hygiene purposes we wanted a cleanable floor with good airflow, which means feet and milking equipment are always off the ground.
“At the same time we wanted the trailer as compact as possible for moving through gates and around paddocks.
“We did the calculations and — with the way we milk — discovered it wasn’t that much quicker to milk four than three. We then spun the stalls around, so they come in one side and out the other.
“It has room to evolve. Currently our vacuum pump can only milk one at a time. So I milk from the middle bay, with the cow on left on the cups while I prep the cow on the right and vice versa, just like a micro herringbone dairy.
“Then if we ever do expand to a bigger vacuum pump, I can milk from the back under the verandah, with cows in all three stalls.” At Sellar Farmhouse Creamery, Tessa runs a calf-at-foot practice where calves spend their first three months nursing from their dam. The herd is made up of Jerseys and Shorthorns. 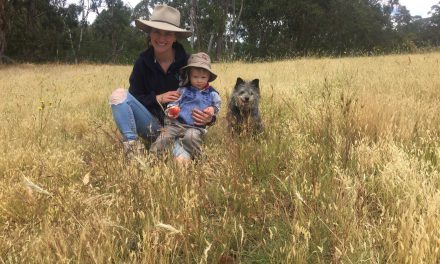 Get the lowdown on flowering native grasses and soil health